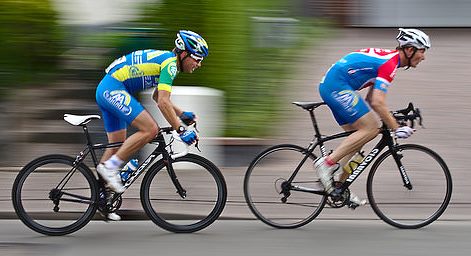 Acceleration has the dimensions of distance divided by time squared, and is the rate of change in velocity (or speed) over time. Because it is a vector (it can have magnitude and direction) it can be the rate at which an object speeds up or slows down, which is the commonly understood meaning; but it can also be a change in direction. The SI units for acceleration are metres per second per second (m/s2).

Acceleration occurs as a result of a force acting on a mass, and is equal to the force divided by the mass. For a rocket this force is applied by the reaction of the gases leaving the nozzle of the rocket motor. For an object falling to earth, this force is gravity, which is a force of attraction between two masses. At the surface of the earth this force is a constant per unit mass, and this constant is called the gravitational acceleration, or g, and is approximately 9.8 m/s2. This constant is defined by the mass and dimensions of the earth and the universal Gravitational Constant.

An object dropped from a height will fall to earth and its acceleration will be 9.8 m/s2, at least initially. Galileo was the first to discover this fact which runs counter to the intuitive expectation that a heavier object would fall faster. As it speeds up air resistance will begin to play a part and this will ultimately limit the velocity to the "terminal velocity" which is the speed at which the force due to gravity is balanced by the decelerating force due to air resistance. When there is no net force there is no further acceleration.

A device for measuring acceleration is called an accelerometer. As well as single-axis accelerometers, multiple-axis models are available to measure both the magnitude and direction of the acceleration as a vector quantity. They are used to sense location, orientation, vibration and shock. Nowadays accelerometers can be found in portable consumer electronic devices such as pedometers, mobile phones, cameras (for image stabilization) and video game controllers.

Accelerometers are normally small electro-mechanical devices which may be a simple cantilever beam with a mass in a sealed container. As the device is accelerated the mass causes the beam to deflect from its rest position, and this can be measured using piezoelectric sensors, or sensing movement by measuring electrical capacitance. A multiple-axis accelerometer would typically have three of these sensors; one for each perpendicular axis. Accelerometers can be sensitive to gravity and may need to be calibrated before use. More exotic accelerometers use laser Doppler techniques or light gates to measure acceleration from an external observing position.

Accelerometers are used in crash-test dummies to measure the intensity of the acceleration. Extreme acceleration causes injury or death because of the resulting forces (the acceleration in a car crash can exceed 100g without a seat belt, which is not survivable). They are also used to measure vibration and in automobile braking systems. Other applications include seismology, inertial navigation and scientific measurement.