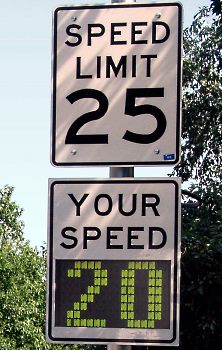 Velocity is also related to acceleration. An acceleration is a rate of change of a velocity. This is also taken to be the derivative of velocity with respect to time, or dv/dt. Let's assume we have a constant acceleration a that an object is undergoing. To find the velocity of that object after a certain period of time, we have to compute a definite integral of the acceleration for that time interval:

One could also remove time from the equations altogether to arrive at Torricelli’s equation.

where v is the final velocity, v0 is the initial velocity, a is a constant acceleration, and Δx is the change in position over the given time interval.

The velocity of moving objects can be measured externally by measuring the time difference between the object passing two known positions. If these measurements are a large distance apart and the velocity of the object is varying the result will be an average velocity. Other techniques involve Doppler measurements, where the change in frequency of reflected sound or light is used to obtain a velocity measurement. These techniques are widely used by road traffic speed cameras, which may involve a Doppler measurement to record speed and trigger a camera which then takes two photographs some time apart as further evidence to establish vehicle speed.

The measurement of the velocity of liquids is called velocimetry. At its simplest this may consist of dropping floats into a liquid flow in order to observe them passing known positions in order to deduce the flow velocity. This general principle can now be used in automated systems using computer imaging called Particle Image Velocimetry (PIV). Other sophisticated techniques include laser or ultrasonic Doppler techniques.

The equivalent measurement for gases is called anemometry. Many devices exist, such as pitot tubes which use the pressure difference between two holes - one in the direction of the flow and one perpendicular to the measured flow direction. The traditional meteorological anemometer uses a simple turbine to drive a generator, with the resulting voltage being measured to give wind speed.

Hot-wire anemometry uses a heated wire and measures the current flowing through it. This indirectly gives a velocity measurement because the current flow is dependent on resistance, itself dependent on the temperature of the wire, which in turn is cooled by the gas flowing over it. Laser Doppler Anemometry (LDA) normally works by focussing two laser beams into a volume of the gas and measuring the reflected signals from tiny particles in the flow, passing through the resulting diffraction pattern. The particles may be naturally present or may need to be seeded by introducing a small quantity of fine powder into the flow.