What is the Volumetric Coefficient Of Expansion? 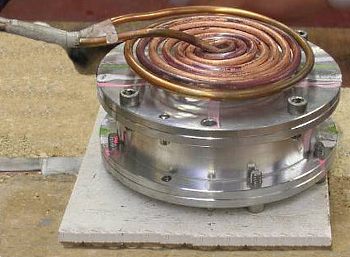 The volumetric coefficient of expansion determines how the volume of a solid object will expand or contract as a function of pressure. All solid objects are made up of molecules and atoms that are bonded to one another electromagnetically. When heat flows through objects, it is introducing kinetic motion at the molecular scale that causes the atoms and molecules to vibrate. Eventually, molecules begin to gain new degrees of freedom, or ways to move in space, and this is the phenomenon that lends rise to the observation that almost every solid object expands when heated.

A change in volume with respect to temperature can be understood mathematically in the following way:

where ΔV is the change in volume, αv is the volumetric coefficient of expansion, ΔT is the change in temperature from the initial temperature associated with V0, the initial volume. There are many recorded values for αv, depending on the substance. There is also a special relationship between αv and the linear thermal expansion constant αL in isotropic materials, i.e. those that are uniform in all directions. For these substances:

There is also such a thing as a negative coefficient of expansion, and we find this to be the case with water when it is cooled. This is because ice has more volume per amount of water molecules than liquid water (ice forms a crystalline structure that spreads the molecules out more than in water’s liquid phase). Instead of expanding when heated, ice shrinks as water molecules break free from one another and disrupt the structure of the crystal.

The study of how heat affects the volumes of objects has many widespread applications in engineering and manufacturing. For example, certain processes require cooling an object to make it contract in order to fit it into another component, which may be heated. It is very useful to know how much heat is required in both processes in order to minimize cost.

Other applications involve using chain or tape to measure long distances. Because the chains have different lengths at different temperatures, one must take account of volumetric expansion in order to know, with accuracy, what the actual distance is. Coefficients of expansion may also be important where high tolerances are involved, and where temperature changes could cause failure.