What is Turbulence Energy Dissipation Rate? 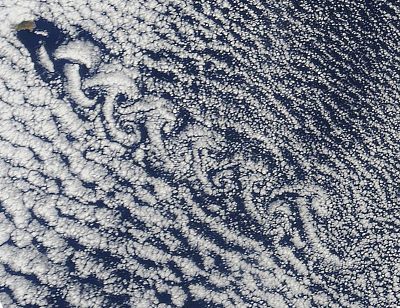 The dissipation of the kinetic energy of turbulence(the energy associated with turbulent eddies in a fluid flow) is the rate at which the turbulence energy is absorbed by breaking the eddies down into smaller and smaller eddies until it is ultimately converted into heat by viscous forces. It is expressed as the kinetic energy per unit mass per second, with units of velocity squared per second (m2/s3).

This process can easily be observed if a liquid flow is made visible with some kind of marker such as suspended particles, and then disturbed by stirring. Initially large eddies are produced in the wake of the stirring implement. But as the liquid is allowed to come to rest the initial large eddies become more numerous smaller eddies. There is a cascade of smaller and smaller eddies until they are no longer visible as distinct flow structures. At a very small scale (called the Kolmogorov microscale) the eddies are dissipated by the viscous forces and the energy is converted into heat. In steady-state turbulent flows this is a continuous process.

In practical turbulent flow modelling a turbulence model is required. The key assumption is of a mean flow with a statistical distribution of a fluctuating component of velocity; the Reynolds-averaged equations. By including this additional velocity component in the Navier-Stokes equations and rearranging, additional terms can be found that resemble the viscous stresses, and these are referred to as the Reynolds stresses. If the stresses can be assumed to be anisotropic then a single "effective viscosity" can be derived that includes the real molecular viscosity (which is usually negligible in fully developed turbulent flows) and an additional and usually much larger "eddy viscosity" (the Boussinesq hypothesis). This eddy viscosity is analogous to the molecular viscosity and represents the work of the eddies in transporting momentum in the same way that viscosity transports momentum at the molecular level.

In order to achieve closure of the set of equations for turbulent fluid flow, some way of computing the unknown eddy viscosity is required. A number of turbulence models exist that ultimately include some degree of empirical input. The kinetic energy of the turbulence is usually involved directly as a conserved property of the flow. The rate of dissipation of turbulence kinetic energy is a little more problematic and we must rely on some empirically based model. The various turbulence models differ mainly in the way the dissipation rate is derived. In some cases the rate of dissipation is derived from other properties of the flow, for example a length scale. In the widely used k-ε turbulence model the dissipation rate (ε) is modelled as if it were itself a conserved property.

Measuring the Dissipation Rate of Kinetic Energy of Turbulence

The dissipation rate can be indirectly measured experimentally by using hot-wire or hot-film anemometers, or using laser-Doppler or acoustic Doppler techniques. These techniques are used almost exclusively in fluid dynamics research.