What Is Surface Tension? 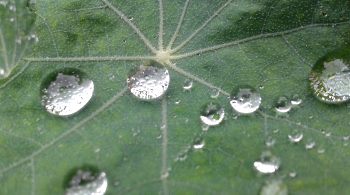 Many liquids have a property known as surface tension. This property arises from very small attractive forces between the molecules (usually water) that make up the liquid. In the case of water, the surface tension comes from the attractive forces between the positive hydrogen poles and the negative oxygen poles of the individual water molecules. Across the surface, the water molecules bunch together because of these forces, while being spaced out by the liquid’s natural resistance to compression.

A handy way to think about the way in which surface tension occurs is to think of each molecule as if it’s playing a game where it wants to minimize its energy state. A polar molecule will have the lowest energy state when it is surrounded by as many other polar molecule neighbors as possible, so it will “try” to get close to as many other polar molecules as it can. At the edge of the grouping of polar molecules, the molecules are still “trying” to do the same, but they can’t be completely surrounded, so they end up creating a spherical configuration because that is what will allow each molecule on the edge to have the maximum possible number of neighbors.

Generally, liquids such as water will minimize their surface area, resulting in a smooth beaded shape. This is exactly the sort of phenomenon we witness when we put our fingers close to flowing water, causing it to “stick” to our fingers, and it is a huge cause of frustration for waiters and waitresses trying to pour liquids from containers that have no spouts. If one doesn’t pour the liquid all at once, it starts to bead on the surface of the glass which then causes it to attract more water, and suddenly there is a spill to clean.

When measured and used in physical calculations, surface tension has units of force per unit length (also energy per unit area). It is represented by the symbol γ and defined by a force along a line with a unit length. This force, then, runs parallel to the surface but perpendicular to the line. Some people find it easier to imagine a tight string with some length L such that if one were to pull the string toward an interior point, the force of that tension could be described as: