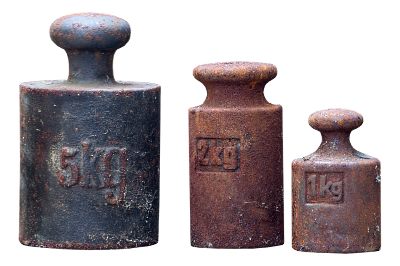 Mass is a property of matter that determines its weight and relates it to gravitation. Physicists have demonstrated that the three forms of mass are equivalent: inertial mass, passive gravitational mass, and active gravitational mass. In common everyday usage, most people think of the mass of an object as its weight, but mass itself is much more fundamental to the study of physics. It is related to many other physical phenomena than just weight. The SI unit for mass is the kilogram.

According to Newton's second law of motion, the inertial mass, m, of an object will determine how much the object will accelerate when under the influence of an applied force, F. In other words:

where G (a.k.a. "big G") is the universal constant of gravitation which has a value of 6.67x10-11 (Kg-1)(m3)(s-2). As said above, many experiments have shown that gravitational and inertial mass are equivalent. In a more modern context, this is found in the equivalence principle of general relativity.

The above equation has more to do with any two objects out in free space that are attracted to one another via the universal law of gravitation. What if we wanted to know something much more practical, like how much something of a given mass will weigh on Earth? On Earth, the force of weight of any object is known to be:

There are other very useful physical equations involving mass. Here are a few of the most important ones.

where P is the momentum of an object and v is its velocity.

where Ekinetic is the kinetic energy of a given body. This is the definition of kinetic energy, which when combined with gravitational potential energy can describe the total energy state of a moving body.

In special relativity, mass becomes relativistic mass and is also related to energy. These relationships are typically written as:

Here, a relativistic mass is equal to a mass moving at zero velocity by some proportionality factor γ that depends on how near the relativistic mass is moving to the speed of light. Another way of saying this is that objects “appear” to be more massive as they approach light speed.

Another more familiar equation from special relativity is the mass-energy equivalence, which states that:

where E is the energy of the piece of matter in question and c is the speed of light which is experimentally determined to be 3x108 m/s.