What is Magnetomotive Force? 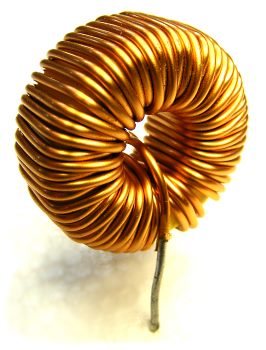 In an inductor, the magnetomotive force is given by the following equation:

An inductor is a special kind of electrical component that stores energy in a magnetic field when an electric current passes through it. Most inductors are very simple in design, and are made by taking an electrical wire and looping it many times around a former which might contain ferromagnetic material. The magnetic field then runs through the middle of the loop because a magnetic field always runs perpendicular to an electric field. This is the same principle that you probably used as a child at school when you made an electromagnet. You may have taken a battery, some copper wire, and a nail and wrapped the copper wire around the nail and connected the two ends to the battery so that a current would run through it. The magnetic field runs through the nail, giving it the magnetic properties you noticed when metal objects or iron filings stuck to it. The magnetomotive force is what makes the iron filings move toward the electromagnet.

There is a second equation that relates the magnetomotive force to magnetic flux and reluctance. It is written in the following way:

where Φ is the magnetic flux and Ɍ is the reluctance, similar to resistance, of the element of the circuit. Reluctance acts like electrical resistance, but it is different in some respects. First, reluctance has its name because if it were the same as resistance, it would imply that the magnetic energy is dissipated across the circuit in the same way a electromotive force is dissipated as thermal energy across a resistor. Reluctance relates more to the medium through which magnetism travels. Air has a higher reluctance than iron because air is a poor conductor of magnetism, or the magnetism is more reluctant to travel through the air. The above equation is known as Hopkinson's Law, and it is considered to be the magnetic analog of Ohm's law (E = IR where an electromotive force E is equivalent to the current I multiplied by the resistance R). Hopkinson's law is considered to be both a definition of magnetic reluctance and an empirical description of the function of certain types of magnetic circuits (depending on the materials used).