What is Kinematic Viscosity? 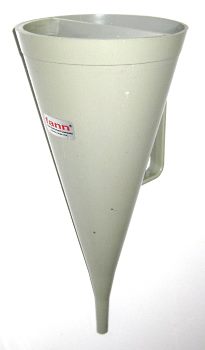 Fluids in which shearing stress is linearly related to rate of shearing strain are called Newtonian fluids or true liquids, since agitation or pumping at constant temperature does not affect their viscosity or consistency. Most common liquids and gases are Newtonian fluids, such as water, oil and air.

Those fluids which reduce their viscosity, when agitation or pressure is increased, keeping temperature constant, are known as Shear Thinning Fluids or Thixotropic Fluids. They appear to be thick or viscous but they can be pumped quite easily.

Those fluids that increase their viscosity with the increase in agitation or pressure under constant temperature are called Shear Thickening Fluids or Dilatant Fluids. Such fluids can become solid when flowing within a pipe. For example cream becomes butter if agitated.

Kinematic viscosity can be measured using a device called a capillary viscometer which consists of a graduated canister with a narrow tube at the bottom. The liquid is placed in the container and allowed to flow by gravity. The higher the viscosity, the longer it takes to flow through the tube (i.e. a fluid with less viscosity will take less time to flow than a fluid with higher viscosity). Kinematic Viscosity is the ratio of absolute or dynamic viscosity to density - a quantity in which the force is external and independent of the mass of the fluid. Kinematic viscosity can be obtained by dividing the dynamic viscosity of a fluid by its density.

where ν = kinematic viscosity, μ = absolute or dynamic viscosity, ρ = density. In the SI-system the unit is m2/s