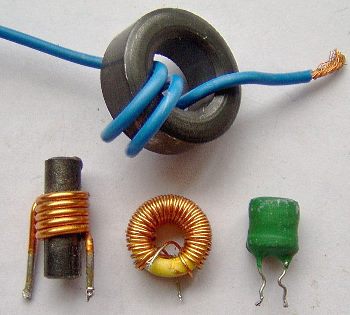 Inductance is a property in which an emf (electro-motive force) is induced in a circuit due to a change in electric current through that circuit or through a nearby circuit. This induced emf opposes the change in the current. The symbol used to denote inductance is L. The unit of inductance is the henry (H), named after American scientist Joseph Henry. One henry is the inductance needed to induce one volt by a change of current of one ampere per second.

In 1831, an English scientist, Michael Faraday discovered that when a magnetic field is changed in a circuit, a current is induced in a nearby circuit. Joseph Henry made this discovery at about the same time although Faraday was the first to publish. The phenomenon of generating electromotive force and current by changing magnetic field is known as electromagnetic induction.

The electromagnectic force induced in a circuit is proportional to the rate of change of the magnetic flux that moves through the circuit.

It means that the more magnetic field lines cut across the conductor and the faster they cross, the greater the induced voltage.

Here L is the constant of proportionality called the self inductance of the coil. It depends upon the number of turns of the coil, its area of cross section and the core material.

If E is the emf induced, using Faraday's Law it can be deduced that,

The phenomenon in which a changing current in one coil induces an emf in another coil is called mutual induction. Let the flux passing through one loop of the secondary coil be F. Net flux passing through the coil of N loops is NF. As this flux is directly proportional to the magnetic field produced by the current, I, in the primary coil and the magnetic field itself is proportional to I, then

where M is the constant of proportionality called the mutual inductance of the two coils. It depends upon the number of turns of the coils, their area of cross section, their proximity and the nature of the core material on which the two coils are wound.

Using Faraday's law, it can be deduced that,