What is the Heat Transfer Coefficient? 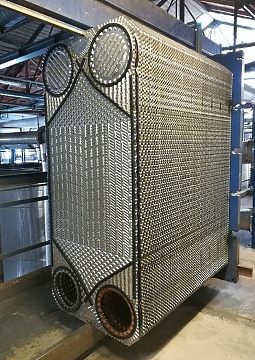 Under forced convection circumstances (a type of heat transfer in which the movement of fluid is generated by an external source rather than just the buoyancy of the heated fluid), one can determine the heat transfer coefficient by using the Dittus-Boelter correlation. This can be helpful for the purpose of designing heat exchangers, which are devices that are designed to transfer heat from one medium to another for commercial purposes. One example of a heat exchanger is the radiator in your car, but there are many others. Heat exchangers are used in refrigeration, air conditioning, chemical process plant, and space heating, to name a few. Although the Dittus-Boelter correlation is not perfectly accurate, it is useful for some applications and is estimated to be, on accurate to within 15 percent. Using the Dittus-Boelter correlation the heat transfer coefficient can be calculated in the following way using two further dimensionless groups, the Reynolds number and the Prandtl number:

where kw is the thermal conductivity of the liquid, DH is the Hydraulic diameter, and Nu is the Nusselt Number which is determined by the following equation:

In this equation, Re is the Reynolds number which equates to:

And Pr is the Prandtl number, equating to:

For the Reynolds number, m is equal to the mass flow rate, and A is a cross sectional area of flow taken from the tube. For the Prandtl number, Cp is equal to heat capacity (assuming a constant pressure), and in both equations, μ is the viscosity of the fluid in consideration. The Reynolds number is a measure of the relative importance of viscous and inertial forces (which will bring about turbulence). Once we have all of these factors, we can get a decent estimation of the heat transfer rate through a particular kind of heat exchanger we plan on designing.

The equation for the heat transfer rate Q, is written as follows:

where t is the thickness of the wall through which the heat is transferred, A is the area of transfer, and k is the thermal conductivity of the medium.

where each subprocess has its own heat transfer coefficient. For heat transfer processes connected in series, the equation is written as: