What Is Heat Of Fusion? 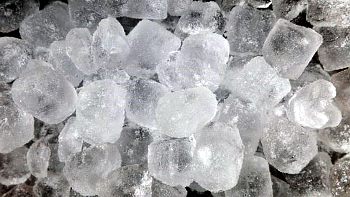 Also known as the standard enthalpy of fusion, or specific melting heat, the heat of fusion is the change in heat energy (ΔH) necessary for a substance to change its state from solid to liquid or vice versa. All of this occurs at the melting point of the substance. The energy required for the heat of fusion is energy in addition to that required to get a substance to its melting or freezing point. In other words, if we were to heat up a solid block of ice with a thermometer inside of it to its melting point, we would observe no change in temperature as the ice block is melting. However, after the block has melted completely, and we continue to add heat to the water, we would continue to see an increase in the temperature on our thermometer.

The SI unit for heat of fusion is the kilojoule per mole. Every mole of ice at the melting point of ice requires an extra amount of kilojoules of heat to change its state to a liquid or the other way around.

The reason that solids require this extra energy change between states is because there is a significant difference in overall order between both solid and liquid states. In water, ice has a crystalline structure that is impossible to obtain in the presence of high amounts of energy. Think of it this way. If we were to cool liquid water down to 0 degrees celsius (the melting point of water), it would be akin to slowing the individual water molecules down just enough so that they can begin to form ice crystal. However, if we don't slow the water molecules down further (the same as reducing temperature), the water molecules will still be moving too fast for the ice crystals to stay put. The same applies in the opposite direction. We need to add extra heat to go from the fairly ordered state of a solid to the more disordered liquid state.

Many substances have different values for their heats of fusion. Water, because of its polarity, has one of the highest heats of fusion at 333.55 joules/gram. Methane has one of the lower values at 58.41 because it is not a dipole. In other words, the chemical bonds in methane are symmetrical, meaning there are no regions that have are either negatively or positively charged. Because methane won’t stick to itself (speaking very bluntly), less energy is required for it to change phase.

We can also use the heat of fusion to predict how soluble certain solids will be in liquids. Assuming we are working with an ideal solution, the solubility of the mole fraction (x2) at saturation will be equal to the following:

where T is the temperature of the solution, Tfus is the melting point, ΔHfusion is the heat of fusion of the substance, and R is the gas constant. The above equation does not perfectly predict these values and typically has a deviation around 11% from the real values.