What is the Electric Dipole Moment? 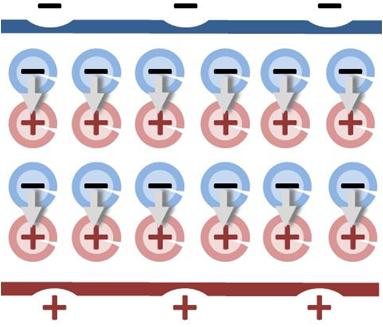 In physics, for any given system of charges, the electric dipole moment is a measure of the separation of positive and negative charges within that system. This effectively amounts to being a measure of the system’s polarity. To understand this, let’s begin with a very simple system of two point charges, one with a charge of +q, and another with a charge of -q, separated by some displacement, d. We would calculate the electric dipole moment, p, of the system in the following way:

Let’s examine a much more general, real world, case. If there is a continuous charge distribution within a given volume V, one can express the electric dipole moment as:

This is the same as saying the electric dipole moment is the same as the total amount of charges, either positive or negative, separated by some displacement d. If we were to give N a value of 2, we would end up with the case represented by the ideal point dipole where p = q.d.

Many substances are natural dipoles. One of them is water, which has a negative charge toward the oxygen atom and a positive charge toward the hydrogen atoms. There is a natural separation of charges in water due to the distance between the oxygen and hydrogen atoms. The fact that water is an electric dipole explains many of its seemingly bizarre properties, for example its high surface tension.