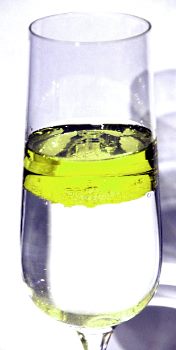 For any material, its density is defined as its mass per unit volume. Assuming we are working with a homogeneous object, this amounts to the following equation:

where ρ (the greek symbol "rho") is the density while m is the mass and V is the volume.

Density is used in modeling many physical systems, one of which is the buoyancy of objects. Buoyancy is defined as the upward force that keep things afloat. Archimedes allegedly ran through the streets yelling "eureka! eureka!" after having found the principles of buoyant force. His equation relates the densities of objects and the fluids they occupy to their actual weight and the apparent weight they have when immersed in a fluid. Mathematically, the Archimedes principle is written as the following:

The above equation can be used in a variety of ways. It was originally conceived as a way to determine if a substance in question was actually gold or a fake. One could rewrite the equation to solve for the density of the object in question. If the density observed upon immersion in a fluid matches the density of gold, which is a very dense metal, then the object in question is likely to be gold because fake alloys are usually less dense. Density can also be used to separate liquids, for example water and oil.

The equation also predicts some fairly intuitive observations. For example, we all know that a balloon will rise when filled with a hot or lightweight gas, but why? This is because the weight of a displaced fluid is directly proportional to the volume of a displaced fluid. If an object has a greater volume for its mass, it will have a greater buoyant force acting upon it. A balloon is a thin bubble of a lightweight material filled with a low-density gas (e.g. helium or heated air). As a balloon inflates, it increases in volume while its mass stays approximately the same (mostly the mass of the plastic shell as helium is very light). At some point, the volume of the balloon increases so much that it displaces enough outside air to increase the buoyant force enough to counter the force of its own weight. Any increase in volume past this point will cause the balloon to float upwards until it reaches a layer of air that isn't dense enough for the same buoyant force to be present.

Once one knows the mass of the object for the give volume, then according to the first equation, one would also be able to calculate the total density of the object. Aside from these methods, one could use a pycnometer to measure the density of a fluid or a gas pycnometer for a gas. A digital density meter is available as well, based on an oscillating U-tube.