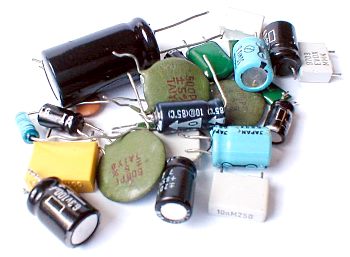 Capacitance is an electromagnetic quantity that describes the capability of a certain body to hold an electrical charge. One such body is a parallel plate capacitor, which is designed to separate charge, which essentially amounts to storing it. Capacitance can also be defined as the amount of electric charge stored for a given electrical potential (voltage). In other words:

where the integral is a definite integral from zero charge to the total charge Q to be added to the capacitor. Taking the mathematics a step further, we get:

This assumes we already have a capacitance value. It is possible to derive the value of the capacitance from geometric parameters and the properties of the dielectric material:

where εr is the relative static permittivity of the medium between the plates, or the ratio of the amount of stored electrical energy when an electrical potential is applied. ε0 is the permittivity of free space, which is a constant 8.854x10-12 F/m. A is the area of overlap of the two plates (for example, if two plates are aligned perfectly across from one another, this area should simply be the same as the surface area of one of the plates). Finally, d is the distance between the two plates that are facing one another.

Now we can combine the previous two equations to come up with an equation that describes the total amount of energy stored in a capacitor, knowing only those three facts about our capacitor. It is written as:

There are many kinds of capacitors available from manufacturers of electronic components. These usually differ in the choice of dielectric material. This affects not only the capacitance for a given size of component, but also the breakdown voltage of the dielectric. Capacitors can be manufactured with quite large capacitances in a small component by creating a "swiss roll" of metalized foil and insulator, giving a large total area for the capacitor.

The farad is actually a very large amount of capacitance and is rarely, if ever, used without an SI fractional multiplier. Normally, electronic components will be in the range of a few picofarads (pF) up to thousands of microfarads (μF – electronic engineers do not use the multiplier millifarads).