What is Atomic Weight? 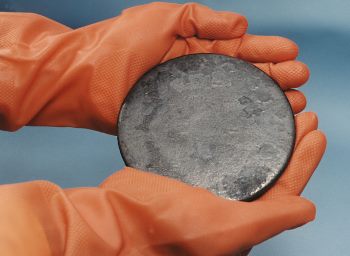 Atomic weight is the ratio of the average atomic mass of an element (always taken from some sample source) to 1/12th of the mass of an atom of carbon-12. It is, more or less, a conventional way of referring to the standard atomic weights published by IUPAC (International Union of Pure and Applied Chemistry).

The following is the equation for the atomic weight of an element:

In this equation, Al is atomic weight to be determined, and msample is the average atomic mass of the element in consideration.

Atomic weight is used commercially and in laboratories in the production of large amounts of chemical substances. If one wants to know how much of one compound when reacted with another will produce a quantity of another, one must first know the atomic weights of the compounds in consideration. In this way, one will be able to start off with precise amounts of chemicals to be reacted and will then be able to predict with a degree of certainty the total mass of the end products of the reaction. Because the atomic weight on an element is in units of grams/mol, one need only know Avogadro's constant, the amount of substances to be reacted and their atomic weights.

The atomic weight of an atom can vary regionally due to changing isotopic composition. Atomic weight is measured by weighing a large number of atoms in a sample, so the quantity can differ depending on where the sample came from. The atomic weight of Boron, for example, is different when a sample is from California as opposed to taking a sample from Turkey. For most practical purposes this difference is inconsequential, especially when one considers the high cost of isotope analysis. Most chemists use the published tables of atomic weights for their calculations.

Atomic weights are known to a high degree of precision for most mononuclidic elements. Because it is much easier to measure atomic weight for these kinds of elements, some of them are measured within degrees of precision as high as one part in 38 million (Fluorine). Isotopic compositions, however, are much more difficult to get atomic weights for, and therefore are less precise. There is also more regional variation to be found in isotopic compositions, which makes it difficult to know that a published number can be substituted for the isotopic composition of an element being used in a laboratory.

The use of the term "atomic weight" to refer to this particular physical quantity is has been the subject of controversy since the late 1960s.. Many have tried to change the name to "relative atomic mass", because the new name would correlate more directly with the quantity it measures, but there has been enough support for the conventional term that it remains in use to this day. Proponents of changing the name argue that atomic weight refers more to a relative atomic mass than it does the weight of an individual atom (atomic mass). Proponents of the other view, however, argue that the modern usage of "atomic weight" has been around for a very long time and that atomic weight refers to a weighted average.