What is Atomic Number? 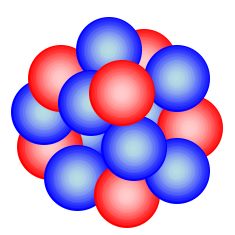 If one knows the atomic number Z of an atom and its neutron number N, then one can also calculate the atomic mass of the atom, also referred to as A. The following equation is approximately true if one concedes that the mass of electrons is negligible.

The atomic number does not necessarily have to be the same as the neutron number. In cases in which the two differ, one is working with an isotope of an element, or a temporarily stable configuration of protons and neutrons that is similar to an element but that results in a different atomic mass.

Z, in so many ways, is the basis of the periodicity of the periodic table. It first defines where an element will be placed on the periodic table but also, coupled with a few principles of quantum mechanics, determines the type of element in consideration. The inert gasses, for example, have a very stable configuration of neutrons, electrons, and protons in such a way that they earn their name. They will tend to not react with any other element because of their electron orbital configuration.

The principles of quantum mechanics determine where electrons are likely to orbit an atom’s nucleus (or rather the probability distribution of the electrons, since at these scales the popular image of a discrete electron following a defined orbit does not really apply). Because each nucleus differs depending on its number of protons, the possible orbitals are partially determined by Z, and in many cases, one can know how the element is likely to react based on its atomic number (assuming all other factors are stable). In the reaction creating the ionic compound sodium chloride (table salt), sodium’s atomic number places it in a group of highly reactive alkali metals and chlorine’s atomic number places it with the halogens, which are also highly reactive. Elemental sodium has one space free in its lower energy orbital while chlorine has an electron in a higher energy orbital. When the two collide, they form a stable configuration in which the electron in the higher energy orbital moves to a lower energy state.

With the combination of knowledge of orbitals and atomic number, we can predict the existence of similar types of reactions such as the reaction between lithium and fluorine, and many others. In fact, the two combined form the foundations of inorganic chemistry, and the basis of all groupings in the periodic table, from the inert gases to the nonmetals, and all the way up to the actinide and lanthanide series.