What is Angular Momentum? 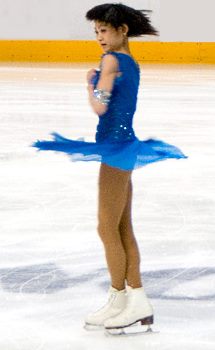 Angular momentum is a physical property of objects traveling in some kind of orbit around another object or an object rotating about an axis (SI units; newton meter seconds). It is the angular analog of momentum, co-opted from our understanding of standard momentum and used as a means of explaining rotating objects in a way that we already understand through the physics of momentum. The most important aspect of angular momentum is the fact that it is very consistently conserved whenever it is observed. Mathematically, this is equivalent to saying the following equation holds true:

Where L is equal to the angular momentum of the rotating object, m is the mass of the object, v is the magnitude of its velocity, and r is the distance between the object being orbited and the object in orbit, or between the mass and the axis of rotation.

Assuming all other factors remain constant, the above equation can be written to model some very common types of physical phenomena. Divers, ice skaters, tornadoes, flywheels, the Earth’s spin, planetary systems, and much more have all been modeled with an understanding of how angular momentum works. The conservation of angular momentum can help us to answer some common every day questions such as the following: Why does a person who is spinning spin faster when her arms are in than when her arms are stretched out? We see this in a wide variety of sports like figure skating, snowboarding, diving, and gymnastics. Here is how it works mathematically with the conservation of angular momentum. If we rewrite the above equation and solve for the velocity term, we get this:

Now, according to this equation, what would happen if we were to halve the radius (e.g. by bringing the arms in)? The only way for the angular momentum to be conserved (or the for the equation to still be true) is to double the velocity term. This explains why people spin faster when they bring their limbs closer to their bodies. It also explains why a gas or liquid spins faster as it moves toward the centre of a rotating body of fluid. This can be clearly seen in the water dissappearing down a plug-hole, in tornadoes and fire whirls. The effect is also used in industrial cyclone separators and the domestic equivalent - the Dyson vacuum cleaner.

By substitution, we get this equation:

What this means, essentially, is that every torque has an equivalent angular momentum that can be added to (or subtracted from) a rotating system.