What is Angular Acceleration? 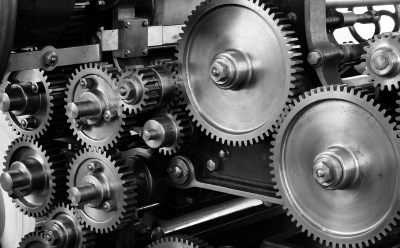 Angular Acceleration is the rate at which angular velocity changes over some period of time. In physics, angular accelerations are commonly found when dealing with systems of gears and pulleys. They are also found in systems involving torques, such as a wrenches and bolts. To give an example: a pulley has a cable attached to it, and as the cable is pulled the disc of the pulley begins to rotate at increasing speeds. The angular acceleration, in this case, is the change in speed at which the disc rotates taken over a certain period of time. The SI unit for angular acceleration is the radian per second squared (rads/s2).

Here aT stands for the linear tangential acceleration, and r is the radius of curvature. The linear tangential acceleration is a vector quantity corresponding to the tangential component of the object’s acceleration. In centripetal motion of this kind, there is also the normal vector of acceleration that runs perpendicular to aT. One quick way to check that this equation makes sense is to imagine what would happen to a yo-yo rotating in a circle around your finger if you were to halve the length of the string that it rotates around. It would rotate faster, and if it rotates faster, the derivative of its speed, acceleration, should also increase because the ratio from the above equation is preserved through the process of differentiation.

Angular acceleration is also functionally related to torque such that the following equation holds true (from Newton’s second law):

In this equation, τ is the total torque exerted on the rotating body, I is the angular mass of the body, and α is the angular acceleration of the body. Think of this equation as the angular analog to the physical equation F = ma, which describes any simple force applied to a mass of some kind. The angular mass is a term (SI units kg m2) representing a kind of resistance to change in rotation rate. I is also referred to as the moment of inertia or mass moment of inertia. If we rearrange the equation above, we get:

Seen this way, the angular acceleration increases as more torque is applied but decreases as the moment of inertia increases. Intuitively, this makes sense. If you apply more force to the object, it should accelerate faster, regardless of whether it is tethered to a center point or not. Note that all of the above depends on our choosing constant torque values. If we were to use a non-constant torque, we would have to use a set of differential equations to describe the changes in angular acceleration over time.