What is an Angle? 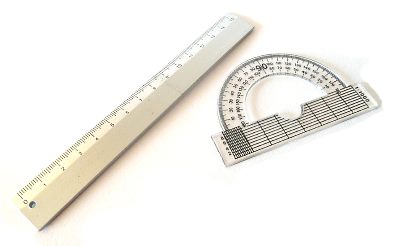 Angle is a term used in geometry and trigonometry and is defined as the figure which is formed by two intersecting lines. These lines are called the sides of an angle. The point where these lines (or line segments) meet is known as the “point of intersection” or vertex of the angle. The magnitude of the angle is measured in terms of how far apart these two lines are, and is termed as the amount of rotation. Angles are measured in degrees, radians, points, and grads.

Angles are also used in geography to determine the location of any point on the Earth, and in astronomy to measure the separation of two celestial objects.

An angle is denoted by the symbol θ (Theta). Angles are measured by using a protractor, which is divided into 180 degrees and is shaped like a semi-circle. One whole revolution or circle is equal to 360 degrees, 2π radians or 400 grads. Hence, 180 degrees is equal to π radians.

In order to measure an angle, an arc is drawn with the centre at the vertex and the angle θ is then equal to,

θ = length of the arc / radius of the circle

Radius of the circle can be chosen arbitrarily since it has no effect on the size of the angle. The above ratio is multiplied by a constant, k, which is dependent on the choice of units. We know that a full rotation in degrees is equal to 360, so the value of k will be n/360 in degrees or n/2π in radians, where n represents a full circle. Depending upon these measurements, the units can now be defined as,

There are many types of angles depending on the size or magnitude of an angle. These types are acute angle, right angle, obtuse angle, straight angle, reflex angle, and full angle.