What is Amount of Substance? 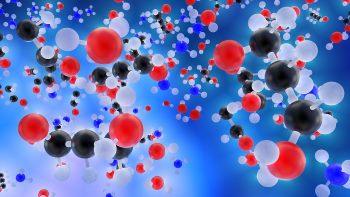 The SI unit is the mole (symbol mol) which is defined as a number of elementary particles equal to the Avogadro constant, which has a value of approximately 6.022 x 1023, and is defined as the number of atoms in 0.012 kg of carbon 12.

In thermodynamics the ideal gas law defines Avogadro's constant as the number of molecules of a gas that occupies approximately 22.4 litres at standard temperature and pressure. This law holds for any gas because the gas molecules are so far apart that the size of the individual molecules is insignificant.

In chemical reactions, the amount of substance is important in studying the stoichiometry of reactions, i.e. the proportions in which reactants combine.

The word "mole" and the symbol "mol" are a contraction of the german word Molekuel (molecule - which works equally well in english). The term was introduced by the German chemist Wilhelm Ostwald in the nineteenth century.