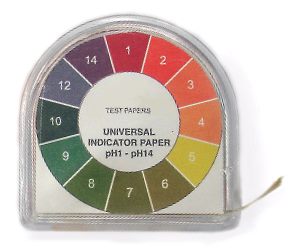 A brief technical meaning of acidity (from the Latin acidus which means sour) is often described as the number of H+ ions that are neutralized by a base. According to a Swedish chemist, Svante Arrhenius, an acid is a substance that releases hydrogen ions (H+) in water, while a base (or alkali) is a substance that gives up hydroxide ions (OH-) when dissolved in water. You will notice from the above definition that it limits acids and bases to substances that can be dissolved in water.

Subsequently, acid was defined by Bronsted and Lowry as a proton donor and base to be a proton acceptor. This definition envisaged that even substances that are insoluble in water can be acids and bases. Then there is another definition of acids that was given by Lewis, which is of a generic nature and defines a Lewis acid as an electron acceptor, and a Lewis base as an electron donor. The behaviour of acid-base systems is unlike redox reactions in that there is no change in the oxidation state or number.

Acidity can be best understood by way of illustrations and comparison with an alkaline solution. The terms "acidic" and "alkaline" are two extremes that describe chemicals, much as we describe temperature by hot and cold as two extremes. When acids and bases are mixed their effects are cancelled out, just like mixing hot and cold water can neutralize or even out the temperature of the water. So, a substance that is neither acidic nor alkaline is neutral.

If you need to measure how acidic or alkaline a substance is, then this can be indicated by what is called a pH (power of hydrogen) scale, as it uses the cologarithm of the concentration of hydrogen ions in a particular solution, which ranges from 0 to 14. A pH of 7 is neutral. A pH of less than 7 is acidic whereas a pH greater than 7 is alkaline. Because the scale is logarithmic, a solution whose pH value is 6 is ten times more acidic than one with a pH of 7, pH 4 is ten times more acidic than pH 5 and 100 times more acidic than pH 6 and so on. Litmus paper uses plant-based dyes to indicate whether a substance is acidic or alkaline. The pH can be measured using an electronic pH meter or more simply (if less accurately) using universal indicator paper, which works in a similar way to litmus paper but has a number of different dyes to give a spectrum of colours that can be matched against a colour scale calibrated with pH values.

If we take the example of pure water, its pH level is 7, i.e., neutral. However, when chemicals are mixed with water, then the solution can become either acidic or alkaline. Highly acidic chemicals are known to be reactive and can cause severe burns. Some common examples of acidic substances are carbonic acid in soft drinks (H2CO3), uric acid in urine, acetic acid in vinegar, tannic acid (in tea and wine), tartaric acid (in grapes), ascorbic acid (Vitamin C) in fruit, and citric acid in oranges and lemons. Another example of an acidic chemical is automobile battery acid (sulphuric acid), which is very reactive.

There are some distinctive characteristics of acids. They taste sour when they are dissolved in water, and when touched, strong acids may have a stinging or biting feeling. They react violently with many metals to form hydrogen gas, and react with carbonates to form carbon dioxide, water and a salt. The stronger the acid, the more electrolytic will be the solution.