A web search for “Pocket Calculator”, or a search on eBay, often turns up the electronic synthesizer popular song by Kraftwerk, the German pioneers of electronic music. 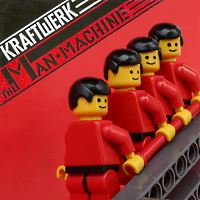 A lot of Kraftwerk songs have a technological theme. Their 1981 album “Computer World” dealt specifically with the theme of computers and their increasing importance in society. Not all of the cultural message survived the translation from German to English. In particular, one of the themes concerned the authoritarian collection and storage of personal data. At the time this was a futuristic fear, but it has now become part of the 21st century Zeitgeist.

Computer World includes tracks with titles such as “Computer Love” (about computer dating), “Home Computer” and of course “Pocket Calculator”. At the time the first wave of home computing was at its peak, even though the main driving force behind this revolution seemed to be the desire to play computer games without having to constantly feed 10p pieces into games machines. The album art for Computer Love shows the members of Kraftwerk rendered on one of the dumb computer terminals which were prevalent in universities and industry at the time.

Amongst the numerous synthesizers and sequencers listed in the album notes is the Casio FX-501P programmable calculator. Unfortunately it does not say whether this device was responsible for the “little melody” played during the bridge section of the song: 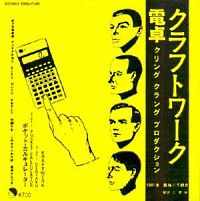 A number of people have devised programs for programmable calculators with sound output capability to emulate the “little melody”, such as the HP-48. >

The song was also released as a single in various languages (Pocket Calculator, Taschenrechner, Mini Calculateur and Dentaku). A Japanese version of the song is called “Dentaku”, and differs sufficiently for it to have been used as the B-side, and also in the 1991 re-mix anthology “The Mix”, in addition to the normal English language version of the song.