If, like me, you hate to throw things away, you'll probably want to at least have a go at repairing small electronic devices like mobile phones and calculators, before just replacing them. If you have a faulty calculator, there are a number of repairs you can attempt, depending on how adept you are at working on electronic devices. 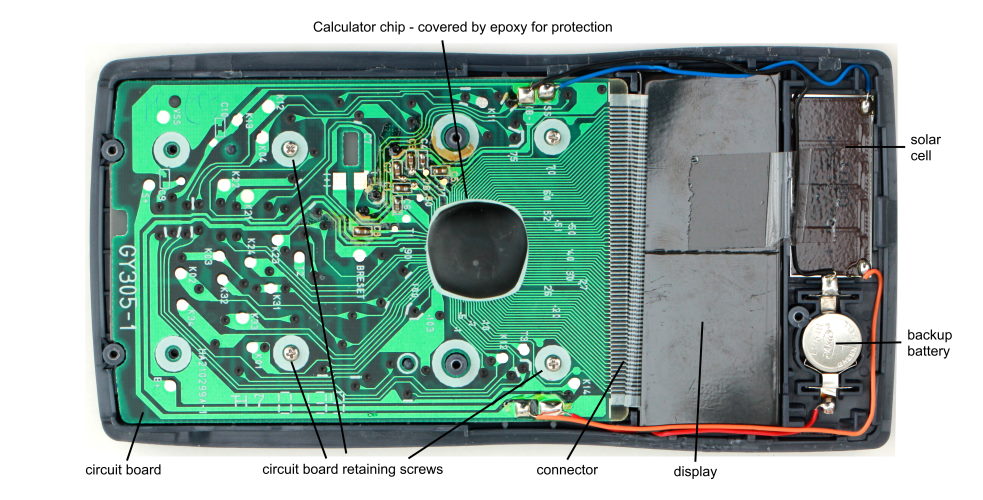 The first thing to check is usually the simplest - replace the batteries. Apart from a few models that are purely solar-powered, this is the most likely cause of failure if nothing is showing on the display at all. Modern LCD calculators use tiny amounts of power, and batteries usually last a very long time. When they eventually become exhausted you may realise that you have never changed the batteries before. For very old calculators that have been in storage there is a high risk that the batteries have begun to corrode, and this can damage the calculator, especially the battery compartment and contacts.

The most common problem with calculators is that the battery becomes exhausted and needs replacing, and if the device has been stored for a while it is highly likely that the battery will also have leaked and caused corrosion of the battery terminals. It's a good idea to remove the batteries from any battery-powered device if you are not going to use it for a year or more. Of course, the reality is that the last time you put the calculator in a drawer you didn't plan to leave it there for a decade; that's just what happened. And now there's a green encrustation in the battery compartment.

The best plan is to remove the old batteries and as much of the corrosion as possible using a screwdriver and a slightly damp cloth. You can then scrape the battery contacts down to shiny metal to make sure you get a good contact with the replacement battery or batteries.

If you can't find a battery compartment door, and the calculator has a solar cell, you may well have a 'dual power' device that has a solar panel and an additional backup battery so that the calculator can be used in low light levels. The illustration below shows a Casio fx-115MS with 'Two Way Power', as well as an internal view showing the back of the solar cell and the LR44 mercury cell battery. 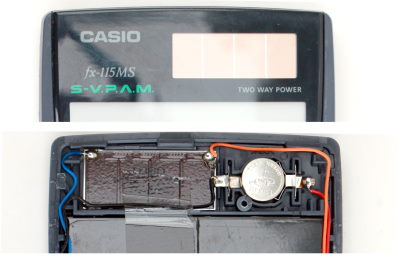 With these calculators the drain on the backup battery is very small indeed, and they rarely need replacing, and the battery is often installed on the calculator circuit board which necessitates dismantling the calculator for access. Less frequently you can find calculators that don't have a solar panel, but nevertheless the designers decided that the battery needs changing so rarely that an access door is not needed. If this is the case, read on:

Calculator cases are usually composed of two halves, and usually have four or more small screws on the back that hold them together, although in cheaper calculators the halves may just snap together. You will probably require an assortment of small screwdrivers. The screws may be hidden behind rubber feet, labels or battery compartment covers. The picture below shows the locations of the screws for the Casio fx-115MS (the screws have already been removed). 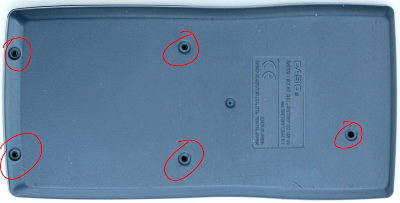 Even when all screws are removed there are often plastic clips which need to be released. You could use brute force, but a better approach is to use special tools called 'spudgers', which are specifically designed for prising apart plastic shells for mobile phones, calculators and other portable electronic devices. It's worth considering getting a kit of tools especially for working with small electronic gadgets, but if you don't have one, you can try using an old credit card as a 'spudging' tool.

A selection of tools is shown in the photograph above. You can purchase toolkits like this fairly inexpensively on Amazon.com or Amazon.co.uk.

Another common issue is that one or more of the calculator keys stops working properly. This may be caused by dust getting between the rubber contact membrane that makes contact with the keypad, which is normally one side of the main circuit board. You can try dismantling the calculator as described above and then removing the screws that hold down the circuit board. Be sure to have the calculator face-down as you do this, because unless it is a rubber keypad, there is usually nothing holding the individual plastic keys in place. It can be a tedious job finding 50 calculator keys on the floor and getting them all back in the right positions!

The LCD display on calculators is usually a separate module that is connected to the main circuit board by a flexible connector, and in some cases this relies on pressure to maintain contact. Usually some kind of rubbery material is used that loses its elasticity with time, with the result that parts of the display stop working. If this is the case, you may find that pressing on the case below the display temporarily alleviates the problem. You can try adding a shim of some suitable material to maintain pressure and try to keep things in contact.

Another problem you sometimes see is that some of the display elements are stuck on, or there is a 'bleed' of dark pixels or elements from the edge of the display. Unfortunately there isn't much you can do here other than replace the display which, unless it is a very expensive calculator, is probably not worth the effort when you can simply by a new one.

In this throw-away age it is difficult to find someone who repairs electronic items. If you do, perhaps a computer repair shop, you really have to weigh up the costs of a repair against just buying a new calculator. It is quite likely that, unless it is an expensive model, that is what will be recommended to you.

You will often find that technology has improved so that you can replace the old calculator with a better model for about the same cost, or less, than the original. For each discontinued calculator on our database we suggest one or more current alternatives.

If you would prefer to replace your discontinued calculator with an identical model, either because of familiarity or nostalgia, then your only realistic option is to search for one on eBay. If it is an obscure model you might simply have to wait until one comes up. If you want to find out the realistic cost of getting a replacement, you can use the eBay "sold listings" feature to see what price that model is typically being sold for.